Wow, I can’t believe this year is almost over! As a flight attendant (and pretty junior one at that), I sometimes find out where I’m traveling mere hours before departure. So it goes without saying, my travels take me more than I take them.

2017 especially has been a whirlwind. I finally managed to nail down my favorites, and am eager to share with you the coolest things I’ve seen- >As I wandered alone through Buen Retiro Park, I made sure to stop by this incredible glass structure. Originally it was built in the 1800s to display flora from the Philippines, but now it seems to just be a fun feature of the park. Free to walk into, I was shocked to be able to capture this photo with the other tourists around. Shortly after I got in trouble with security for leaving my GoPro unattended… Oops! >I returned home from work one day to my roommate packing for a trip to Lisbon, and I couldn’t pass up the opportunity to join! A senior flight attendant was wonderful, and rented a car to drive us down the coast to Cascais. This place was MAGICAL! There were plenty of people around, but it still felt in some ways private. We wandered through boutiques and cobblestone streets, finally settling on the beach to soak in the sun. I can’t get over this place… I mean look how beautiful that water is! >This past summer my sister convinced me to go on an impromptu backpacking trip through Germany. It was insanely fun, but wicked exhausting! One of our first stops in Berlin was this garden, which is one of the largest in the country. The large trees canopied winding paths, and dashes of flora were sprinkled everywhere! It was hard to believe this place existed in such a busy city, I felt like I was in wonderland. >This childhood Greek mythology nerd still can’t believe she saw the Parthenon. I had to wake up at the crack of dawn to make it before flying back, but the effort was WELL worth it. As it’s commonly known, this structure was erected as a temple to the goddess Athena, and has been around for thousands of years (dating back to 447BC!). It’s breathtaking, and lives on as centerpiece of the Acropolis. When I was finally able to pry myself away, it was equally as magnificent to see the surrounding views of Athens. (Tip: get here EARLY to avoid crowds!) >This layover was equally as surprising, and even included a deadhead (flying as a passenger) on the way back! With 30+ hours to kill and a guaranteed nap on the way home, my flying partner and I set off to Narita-san Shinshō-ji. This Buddhist temple in central Narita was magnificent and filled with beautiful ancient structures. When approaching the main temple we heard rhythmic drumming, and ran up the stairs to witness the Goma prayer ritual and fire ceremony. It was unbelievable! Pictured here is The Great Peace Pagoda, looking like an absolute postcard. >How could I not include the El Yeso Dam from my trip to Santiago!? After driving a few hours outside of the city, our eyes feasted on the magnificence of Chile’s major fresh water source. Nestled in the Andes, this reservoir has only been around for about 50 years and can hold 250,000,000 cubic meters of water. This excursion was probably the biggest highlight of the trip, and made me feel like I was hanging out in a water bottle label! A vlog of our adventures in Santiago is here as well!

Man has 2017 been a good one. Even with the ups and downs of working in the travel industry, it’s been moments like these that have made being a flight attendant the best job in the world. Here’s to beautiful sites both big and small, and each day full of discovery!

What are some of the best things you’ve seen in 2017? Help me add to my destination list, and make sure to check out my lifestyle and travel blog Miss All Over the Place to see what I’m up to next! 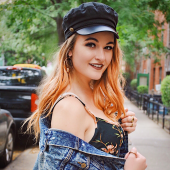 Carry On Essentials for Your Next Long-Haul Flight Flight Attendant Secrets Revealed: What it Takes to Get the Job I Found an Airplane Wifi Loophole You Wouldn’t Believe!