For the past 18 months, flying Club Europe on a short flight with British Airways meant you received a Panini as your hot option. It’s become something of an amusement since it’s always on the menu. It’s now going, with new catering due on 12 September.

Randomly, I had two flights the first day the previous new catering came in on 26 March 2017. On the first flight, I received the cheese, tomato and pesto hot sandwich. On the second flight, the beef and jalapeño version. Since then either one or the other, always.

For a change I was travelling with a friend, so we went to the lounge in Terminal 5B. It is usually much quieter than the one in the main terminal and today was no exception. 
After sampling the food, my friend decided to take a shower and eventually we got fit by walking back to the Terminal 5A. Eventually it was time to go and boarding was swift and efficient with the new boarding process separating people by groups.

On Board And Visiting The Toilet

Happily I had a friendly crew, which was evident on arriving at the aircraft door as they cheerily greeted me and engaged in a quick few words. Soon enough I was seated in 2A in Club Europe. While boarding continued, I decided to hit the toilets. Heathrow in the evening Mirror has had a big day 
This aircraft had obviously been working hard throughout the summer. Little details such as the brown line across the top of notices show the ingrained dirt that a good deep clean would sort out.

Soon enough we buttoned up and sat through the Comic Relief safety demonstration version 2.0. It’s a little shorter than before and I find it quite alright. Once in the air, the crew swung into action and served from the forward galley, rather than doing a trolley service. The table in the middle seat – these are going, sadly. They’re very handy! It’s the cheese, tomato and pesto one! 
Champagne arrived and soon after I had my Panini. It evolved from one uncut bread log to being cut in half and now they stand it up so it looks all business class like. Fun! It’s tasty enough, I ate it all, then we descended and landed in Dublin after more Champagne.

While I won’t lament the passing of the Panini – after all, there’s only so many times you can get the exact same thing on a flight – it was always tasty and of decent quality. My only issue was that you always received the thing if you wanted something hot.

So, it’s goodbye to an old friend, and hello to an even older friend. The scones are coming back at afternoon tea, which means the BA830 from London Heathrow to Dublin on a Sunday afternoon will once again become my flight of choice. They’re just so good!

What do you think of the change? Will you miss the hot sandwich or are you happy to see what’s next? Thanks for reading and if you have any comments or questions, please leave them below. What special meals can you get on flights when on a diet? 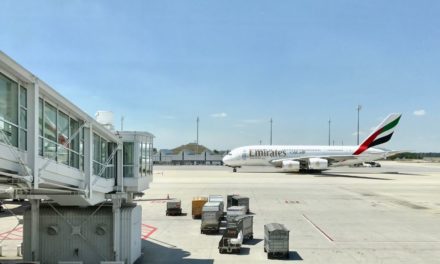 Here are some changes to a British Airways safety card