SS United States Will Not Return to Sea

In February, Crystal Cruises disclosed that it was exploring the possibility of restoring the iconic oceanliner, SS United States, to seagoing service. Crystal undertook an extensive technical feasibility study to ascertain whether or not the ship could be brought into compliance with current regulatory requirements and start sailing regular cruises again. After a 6-month study, the company determined that the investments needed to modernize the ship were not commercially viable. 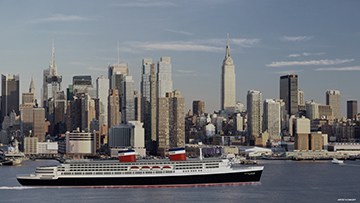 According to a press release from the SS United States Conservancy

“Following an intensive, six-month evaluation, Crystal Cruises today determined that while the SS United States is structurally sound, the technical and commercial challenges associated with returning the historic liner to service as a modern cruise ship have unfortunately proven insurmountable. As a show of support for the vessel, Crystal Cruises will be making a significant donation of $350,000 to aid in the Conservancy’s ongoing mission to save the ship. The Conservancy intends to resume its pursuit of stationary redevelopment opportunities for America’s Flagship.”

The release went on to provide greater details on the technical challenges that would need to be met to bring the ship back into service.

“Led by retired U.S. Coast Guard Rear Admiral Tim Sullivan, Crystal’s impressive team of maritime experts and engineers conducted numerous assessments on the ship in the Port of Philadelphia, where it has been docked for 20 years. The evaluation and testing included in-depth assessments of the ship’s structural condition; underwater inspections of the hull by divers; the examination of her fuel and salt water ballasting tanks; and a series of intensive engineering studies to deduce what would be needed to bring her back into service.

Regrettably, the technical feasibility study concluded that while the ship is remarkably intact and structurally sound, modifying the ship for today’s standards for oceangoing service (SOLAS) would require significant changes to the hull that would pose stability challenges. Additionally, the installation of a modern, state-of-the-art diesel electric propulsion plant would have necessitated altering of the existing shaft lines and rebuilding about 25 percent of the hull to reconfigure the ship to a twin shaft-twin rudder arrangement. While it was known that the vessel would need to have been essentially rebuilt from the inside out, these specific challenges, among others, collectively posed significant risk to the success of the project.”

The SS United States is a historic ship and a testament to American engineering. She still holds a trans-Atlantic crossing speed record. While it would be marvelous to see the vessel sail again, the likelihood that anyone could accomplish the technical changes necessary to bring the ship into regulatory compliance at a cost that would make the ship commercially viable was never very high. Here’s to hoping the Conservancy can find a way to save the ship and find a future as a museum or other stationary attraction.

Is the Potomac considerably shallower than the Delaware at Philadelphia? I wonder what the Big U’s draft is with her interior gutted and most mechanical systems removed. She could ride high being towed up the Potomac, be converted to new use on site, and rest inside a specially built enclosure. After all the new weight is added–restaurants, convention facilities, hotel, whatever–ballast could do the last bit to bring her down to normal cruise level where she could be fixed in place, just as they’ve done with the Queen Mary. Still a pipe dream, I know. But wouldn’t it be impressive!

This outcome is disappointing but not unexpected. While I was excited to think the Big U could sail again, I never really believed it was technically possible or financially feasible. I still think she belongs at her old home port in Manhattan, Pier 86 on the Hudson. But I allow myself one fantasy. Restore her original beauty and bring her to National Harbor on the Potomac. Just imagine crossing the Woodrow Wilson Bridge on I-95 and seeing that majestic beauty appearing ready to sail for ports unknown. Not likely to happen . . . but what a showpiece for millions… Read more »

I think National Harbor would be a beautiful solution, Gary. Though I think the ship’s 31′ draft might present a hurdle to getting her that far up the river. Sitting alongside the Intrepid in NY Harbor might be a nice ending too. I’m really afraid the ship is going to wind up at the breakers at this point, since we can’t seem to work together as a country to create big solutions to big challenges anymore.