What do you get when there’s no meal in first class on AA? The arbitrary dinner cut off time for American Airlines domestic flights in first class is 8:00pm. Instead you get the usual warmed nuts plus something called Lite Bites.

American Airlines doesn’t stand alone here. Most of the US carriers seem to have no full meal in domestic first class on flights after 8:00pm. Perhaps this is a good thing? Let’s see.

After spending some time in the Flagship Lounge at O’Hare, it was time to board. Unusually enough, I was on exactly the same aircraft as the previous flight, just in a different seat.

The Bulkhead Row on American’s 737

Being a petite sort of guy, when I stretch my legs out fully in the bulkhead seat my toes just hit the divider. Therefore if you’re over about 5’7″ tall, you will have less room to stretch your legs than if you had sat in other seats further back.

Missing in this row is the little table that flips down from between the seats in front. Still, if you want no-one reclining into you and you’re not tall, the front row is very comfortable. 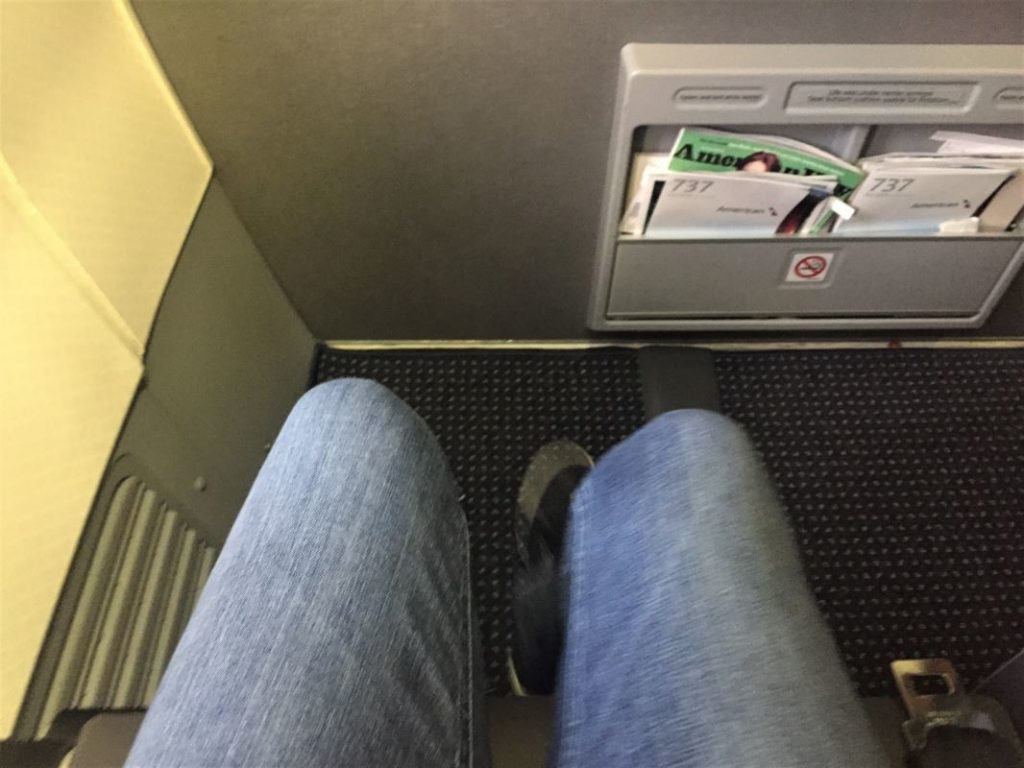 Leg room in 3A Audio controls in the seat 
Before departure the cabin crew serve pre-departure drinks. They will make you whatever you like it appears. I already have a note to in future not have the sparkling wine on American as it really is awful.

Video announcements periodically play during boarding too, about carry-on luggage and what not. I’m used to these announcements being made by the crew in Europe as opposed to a video so it was nice to see something different.

Is No Meal A Good Or Bad Thing?

Our sector between Chicago and Denver was timed at two and a half hours. Imagine sitting there that long and not having a nice meal served? Trepidation all round. 
Drinks are served first and I took a wine – again, terrible – and a water. It’s a thing on American Airlines domestic first class to have warmed mixed nuts served in a ramekin, so nothing unusual there as they’re always nice. Off to Denver we go! 
After this is the main event which I’ll detail below and after eating you get a mint. But what is served as your Lite Bites snack on a flight with no meal?

Forking out hard earned cash for a seat in first class on a flight with no meal gets you a cookie! Being a premium cabin, you get to choose between something called Snickerdoodle and Chocolate Chip.

When the flight attendant offered me the choice, my look of bewilderment at the word Snickerdoodle and frozen expression caused her to offer both cookie types to me if I wanted. I wanted – anything to recoup my investment on the ticket! 
Served lovingly on individual paper napkins, the cookies are warm from the oven and tasty. I really like sweet things, so I found them to be really nice. Turns out Snickerdoodle tastes like cinnamon, but why use a boring name like cinnamon when you can Snickerdoodle? Really though, this is the food served on a two and a half hour flight in first class? Are we all 10 years old here? 
By comparison, above is the food offered on a British Airways flight in Club Europe – the equivalent to American’s first class – departing at 10:25pm. That’s more like it!

There is nothing at all wrong with warmed nuts and there is nothing wrong with warm cookies. However, when you’re paying for a seat up the front of the aircraft it would be nice to get something more to eat than a cookie. If it was a one hour flight, fine but not for two and a half hours.

Perhaps the best thing about this flight is the fact I learned all about Snickerdoodle cookies and how they taste. I guess it was worth the price of the flight after all.

What do you think of the cookies served after 8:00pm on American in domestic first class? Thank you for reading and if you have any comments or questions, please leave them below. Isn’t It Time We Ditched Liquid Restrictions At Airports? What Is Flying The Rarest British Airways Aircraft in Club Europe Like?

What is really annoying is when AA lists your flight time at 2:58 mins. Conveniently just under the 3 hr mark for serving a full meal. Do they think we are all morons who won’t notice the cutoff? Do they EVER actually arrive within that time frame? Shame on you American Airlines!

Yes, I can see why that would be annoying. There should be a few minutes grace either side, but I guess they have it nailed down in the cost of the route. Thanks for the comment!

You should never travel on US airlines in the US in any other class than economy. Its just not worth it. Even a slightly larger seat for a few hours is too much unless you are using points. Still you have to weigh the value with the cost. While most of my domestic flights are within Canada and these are the same low value, it makes me shudder at actually spending money for such poor value returns in domestic “ first”.

Yes, I agree, you really do need to weigh up the value versus the cost. As I’m not a big person, an economy class seat fits me just fine so the extra space is a nice to have rather than essential. It’s why I’m more about the food than anything else. Thanks for the comment!

The sparking in a plastic cup , come on .. no first class here

Well, that is one thing where US airlines are arguably better than Europe. On short haul domestic flights in Europe, you usually don’t get any kind of pre-departure drink. That being said, the sparkling wine is terrible – I see why seasoned flyers ask for a Mimosa. You need the juice to drown out the awful taste. Thanks for the comment!

Don’t even get me started on the random timing for when a United flight has a hot meal, vs a cold snack vs a basket of crappy snack options (banana or bag of chips?). Like 1-1.5 hours its basket-o-snacks, 1.5-2.5 its a cold snack (fruit plate and cheese or half a sandwich or wrap) and 2.5 and longer its a hot meal. I haven’t even gone into the weirdness that some planes don’t even have ovens so sometimes you get bupkiss even on a longer flight. Almost any flight in Europe gets a meal. No matter how short. I think… Read more »

Ahh, that explains what United do. I saw what was written on their website and it sounds little better than “a banana or a bag of chips” – but that’s marketing for you. No excuse for no ovens though, it would really annoy me to get nothing on a really long flight. I just think that in First Class you should be getting a decent meal for the extra cash you pay. If it can be done in Europe and the airline can still make a profit, there’s no reason why it can’t be done in the USA. Thanks for… Read more »