American Airlines usually serves food in domestic First Class on flights over 900 miles for departures between 5am and 8pm. While Washington DC to Chicago is under 900 miles, it is one of a select few routes where the meal service is treated like a longer flight.

Dinner service is described as “warmed mixed nuts, followed by a three-course meal including a warm cookie for dessert”. After spending some time waiting in one of Washington Reagan National Airports Admirals Clubs, it was time to board.

There were no Concierge Key members so I ended up being first on board, which I wanted so I could get some pictures of the seats and cabin. There are four rows of First Class on American Airlines Boeing 737 fleet, starting at row three. Bulkhead row 3A and 3B 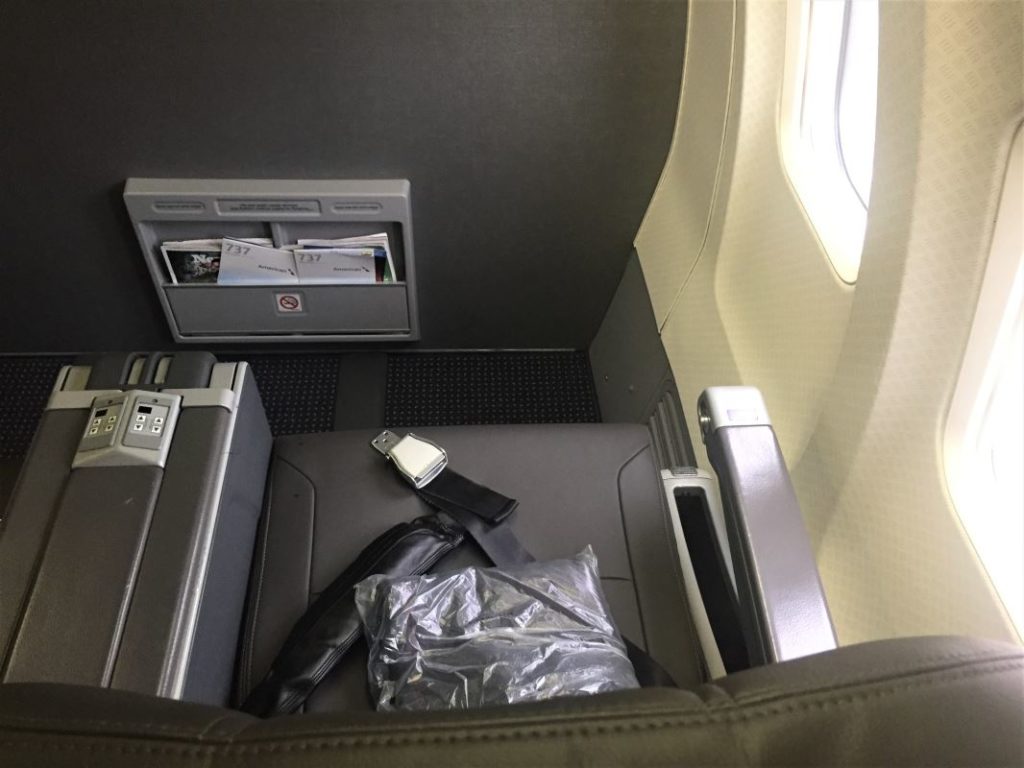 Looking at 3F from above and behind 
People seated in row four and back have an extra flip down table between the two seats which does come in handy. There is also storage under the arm rest which is perhaps where you can stash a tablet. The extra centre table between seats Your seat number and storage The notice on the front 
Seating is quite comfortable and there is plenty of space to settle into. In the USA, the First Class passengers tend to all be seated to watch the parade of plebs passing headed for the Main Cabin.

Flight Attendants sneak their way in between boarding passengers to enquire if you’d like a drink before departure. I always take the sparkling wine or Champagne and today is no exception. 
The bubbles were very average, but I really don’t like the mat used for under the cup. It’s advertising and while it may save a penny, it looks cheap cheap cheap.

Let’s Visit The Toilet Before We Go

When you have to go, you have to go and I wasn’t crossing my legs throughout taxi and take-off. Being relaxed and enjoying the flight is essential, so a pre-flight tinkle was in order. Don’t screw it up! This means go back and sit down


An added benefit of visiting the facilities before flying is that they are virtually guaranteed to be clean. Once done, I headed back to my seat and strapped in as it was almost time to go.

Since DCA-ORD is one of those flights that gets a dinner service, I was quite looking forward to seeing what was being dished out. The crew first come through asking for drinks orders and your selection from the menu. The drinks and warm nuts then arrive. A lovely evening for flying 
Wine on American is never really that great, so I restricted myself to just the one glass. The warm nuts were as they always are, warm and nutty. Next up came the dinner service, which I had been waiting for. Salad and chicken with Mediterranean vegetables Close up of the main Close up of the salad You get bread too


Anaemic is the first thing that sprang to mind when I saw the chicken. Perhaps I was flying Weight Watchers Airlines, because it certainly looked lean. Once I got over my surprise, I tucked in. The salad was good, the chicken and vegetables fine. It just wasn’t exciting at all and nothing compared to the explosion of taste I experienced on a similar length flight with British Airways. 
Once the meal is cleared away, you get a chocolate chip cookie for dessert which is a nice touch. Shortly after we commenced our descent and landed into Chicago without incident.

Perhaps my expectations were coloured by a series of amazing meals in Club Europe on British Airways, which is the equivalent of American Airlines domestic First Class on routes such as DCA-ORD. I quite frankly found the food to be meh.

Nothing about it was interesting or exciting to the palate. It was food and it was fine and that was it. On board service from the crew was friendly and the drinks were mediocre at best. The flight cost me €80 more than flying in Main Cabin and the larger seat makes it worth I guess.

What do you think of the meals on American Airlines served in domestic First Class? Thank you for reading and if you have any comments or questions, please leave them below. It’s not a mat under your drink, it’s a paper napkin.