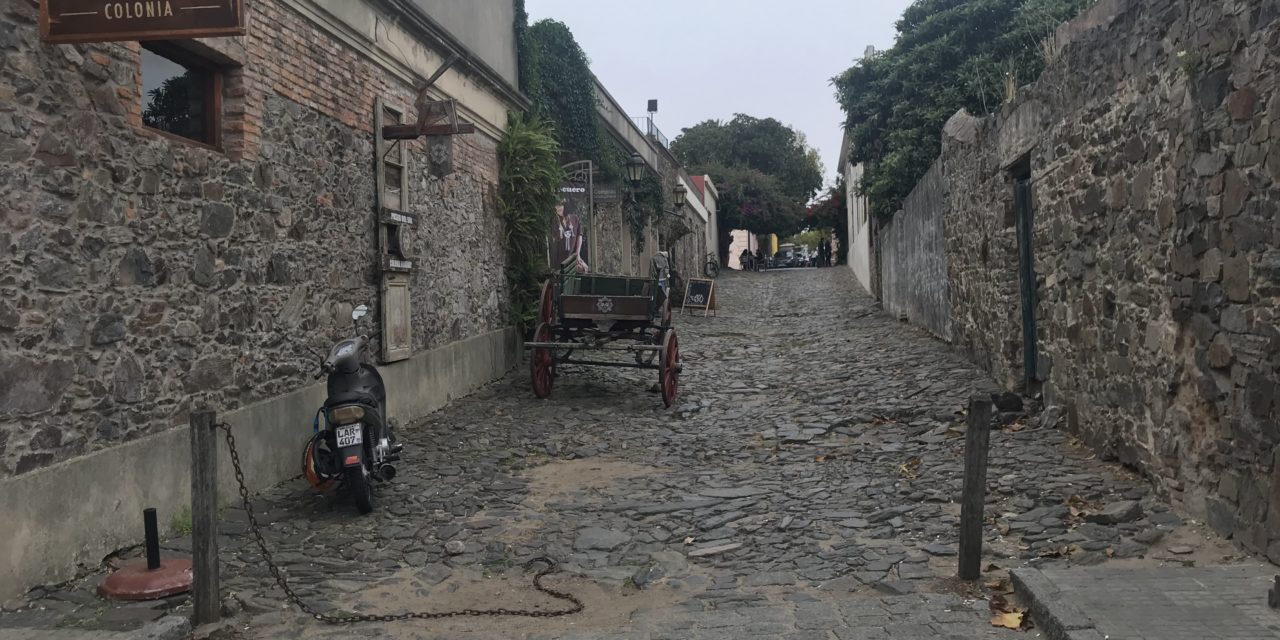 A day trip to Colonia del Sacramento is a great addition to a trip to either Buenos Aires or Montevideo. Or if your transiting between the two, as we were. This town is one of the oldest settlements in Uruguay, and it is well worth visiting for a day trip. The town is a UNESCO-listed world heritage site, if you are one of those interested in visiting these naturally or culturally significant places.

Getting to Colonia del Sacramento

A day trip to Colonia del Sacramento is easily possible from either Montevideo or Buenos Aires. If coming from the latter, I highly suggest booking the morning ferry (departure around 8:00 a.m.) and an evening return, which is possible many days. There are three different ferry services that operate the Buenos Aires to Colonia del Sacramento route. I chose the Colonia Express (review of our experience) for our transit.

If coming from Montevideo (to where we would continue), you can visit by bus. Again, the best option for a day trip to Colonia del Sacramento is the an early departure and late afternoon return. There are a couple express buses which are the most efficient option. Express service will take about 2.5 hours, while the local bus will take about an hour longer.

Whether you arrive by ferry or bus, you’ll be just several blocks from the old, colonial section of Colonia. The bus station and ferry terminal are about a 3-minute walk apart. We actually headed to the bus station after arriving from Buenos Aires. Just head out the ferry terminal gate and continue right along the avenue.

Luggage storage is available in the bus station. The cost is 50 pesos per bag for up to 2 hours, increasing to 80 pesos for up to 4, and 100 pesos for up to 6. For our two bags for 4-5 hours, this is only $5-6 USD, very reasonable, in my opinion. The bags are kept in a small room and watched, but they are not under lock and key. I did leave my laptop in my pack, which was a bit of a risk. Everything was returned safe and sound. If you’re looking to rent a car to explore other areas of Uruguay, Hertz, Avis, Budget, Europecar all options at the bus terminal. There is also a small cafe. We ended our visit with a bite to eat here before the bus ride to Montevideo. You can also connect to WiFi here, but it isn’t very good. I struggled to do much of anything.

As it is a bus terminal, you can also obviously buy tickets for the bus to Montevideo (or other towns). More on that later. Now it was time to explore Colonia del Sacramento. The tree-lined streets of Colonia del Sacramento were quiet, with surprisingly few people. I belatedly realized we walked a side street (Avenida 18 de Julio) and not the main avenue (Gral. Flores), which probably contributed to the feeling that we were the only ones in the town. The trees provided a lovely canopy, something that we would see in Montevideo as well.

We wandered a bit, heading for the older part of Colonia. Passing a few restaurants, I realized that 11:30 was a hair too early for lunch. At least by Uruguayan standard.

Luckily, we found a tiny cafe on the corner of Calle de la Playa and Calle Real. I had about given up hope, figuring we’d visit some of the museums first and return for lunch later. But after a quick exchange in Spanish, it was clear we were welcome to sit and enjoy.

The cafe is called West Food, and it was a nice spot. Situated on the corner of two streets paved with colonial cobbles, it it is a great spot to sit outside and enjoy the weather. There was a breeze and a forecast of rain that afternoon, but at that point the temperature was perfect. West Food only offers a fixed-price menu, but they have a few different options. And at 320 pesos (~$9.50 USD) for lunch including a beverage, I thought it was entirely reasonable. Even more so when our fresh orange juice and mint lemonade arrived in giant pint glasses. Both were delicious.

I ordered a chivito, which is pretty much the national sandwich of Uruguay (chivito is literally: “kid meat”, but it’s beef, not goat). It is the analog of the Argentinian lomito, which I tried during our second day in Buenos Aires. Even more so than the sandwich I had in BA, the steak was tender and easy to eat. Overall, the food was decent. I’m sure you can find a better chivito in Uruguay, but it was a great first stop. West Food accepts some credit cards, and also Argentinian pesos (at a poor exchange rate), but I opted to pay in Uruguayan cash. I don’t know about you, but I find myself feeling bad running my card at tiny family restaurants like this, knowing they probably lose 3-4% after interchange and all markup. From there we started to wander the old part of Colonia del Sacramento (el barrio histórico). I spotted this cool map outside one of the museums, displaying what the settlement looked like over 250 years ago. Colonia del Sacramento was founded by the Portuguese, and the old city was constructed primarily by them. Colonia changed hands numerous times, but during its first hundred years of history, Portugal typically retained control. Most of the fortification that surrounded the city was removed hundreds of years ago. There is a variety to the streets and history of the buildings of Colonia. Some are relatively modern, at least compared to the oldest parts, such as this street here with square cobblestone pavers and some newer construction. Others streets are paved with irregular stone, and building walls are a mishmash of construction types. Colonia del Sacramento is located on a small peninsula jutting into the Rio de la Plata. Its lighthouse dates from the 1850s, standing in stark contrast to the colonial ruins attached to it. These are the remains of the Convento de San Francisco. Colonia has a number of small museums that you can explore during your visit. A single ticket, available at the Museo Municipal, covers all of them. There are a total of 5 different sites. Tickets cost $50 Uruguayan pesos per person (~$1.50 USD), which is the only currency accepted.

The municipal museum has an interesting mix of objects. The first rooms about the history of Colonia are the most interesting, in my opinion. As you progress, the exhibits change to small collections of dinosaur bones, birds, and such. The only one I really found impressive was the butterflies and insects. It definitely would have been cooler to see live morphos, though. We explored the other museum sites, including one dedicated to the Portuguese period history. Each is small, but they give a glimpse into the life and history of what this settlement used to be. I highly suggest that you brush up on your Spanish before visiting, as you’ll need it for much of the reading (there is some English, however). After exploring the museums, we headed toward the old city gate and remaining section of the wall. It was fun climbing along the old fortification and walking down to the Rio de la Plata. The day had gotten a hair less hazy, and we could *super* faintly see skyscrapers of Buenos Aires in the distance across the river. The Rio de la Plata is about 20 miles wide at this point. The old city gate itself is one of the highlights, with its old wooden drawbridge. I was initially annoyed that our Colonia Express Ferry had taken so long to dock, reducing our visit by about an hour. But even with that delay, we were able to explore Colonia del Sacramento satisfactorily in about 4 hours. Depending on your interest in the history and how leisurely a pace (and lunch) you take, anywhere from a half to a full day is enough to see the old city.

Moving on to Montevideo

Our day trip to Colonia del Sacramento concluded at the bus station where we retrieved our luggage, grabbed some food, and then board our Turil bus to Montevideo. I messed up the booking, buying us tickets for the 4:30 local departure. I wanted the express, which would have saved us an hour transit time to Montevideo. Live and learn. At least it was a comfortable ride, and enjoyable watching the gently rolling hills of Uruguay pass by.

If you’re interested in visiting Uruguay, I recommend considering a day trip to Colonia del Sacramento. United Brazenly Lied About Fees, Bitten by Chase 5/24, and No Project Sunrise?!