Which cities and museums have a Concorde you can visit? When Concorde was retired in 2003, the fleet was dispersed to museums around the world so people in the future could visit them. Museums in Europe and the USA were the main recipients, which makes sense as this is where Concorde mainly flew to and from.

Just 20 of the supersonic jets were produced, ten each in France and England. Two of the French built Concorde’s no longer exist, one having been scrapped in 1994 and the other lost in an accident in 2000. In the second article for Concorde Week (the first is here), we have a look to see where you can visit Concorde today.

Visit Concorde in the United Kingdom

The English built Concorde’s are easily found in the UK and there are six scattered around the country. You can find the British prototype G-BSST at the Royal Navy Fleet Air Arm Museum in Yeovilton, Somerset. It has been there since 1976.

The British prototype at Yeovilton


On display almost as long is the pre-production aircraft G-AXDN. You can find this at the Imperial War Museum in Duxford, where it is open daily for visits. G-BBDG at Brooklands Museum – I got an excellent picture of the sky; the aircraft not so much!


A production test aircraft registered G-BBDG is on display at Brooklands Museum at Weybridge in Surrey. I’ve been to this museum and the Concorde experience is really excellent. Going on a “flight” is really lots of fun, so I recommend it.

The National Museum of Scotland at East Fortune has British Airways Concorde G-BOAA on display. I have also been to this museum and going on board Concorde here is another great experience. They also have other British aircraft such as a Dan-Air Comet 4 and a BAC 1-11 on display among other things. The cockpit of G-BOAA in East Fortune, Scotland


Over in Manchester, you can head to the Runway Visitor Park by the airport, which has Concorde G-BOAC available to visit. It’s another great place to see the aircraft, and there is also a Trident and an Avro RJX to see among other things as well. 
G-BOAF was the very last Concorde built in the world, and it is on display at Aerospace Bristol, located at the former Filton Airport. This one is on my list to visit sometime in the future.

France built and flew the very first Concorde, registered F-WTSS. You can visit this at the Musée de l’air et de l’espace (Air and Space Museum) near Le Bourget in Paris. Interestingly, Air France Concorde F-BTSD is also at the same place, so you get two Concorde’s for the price of one! 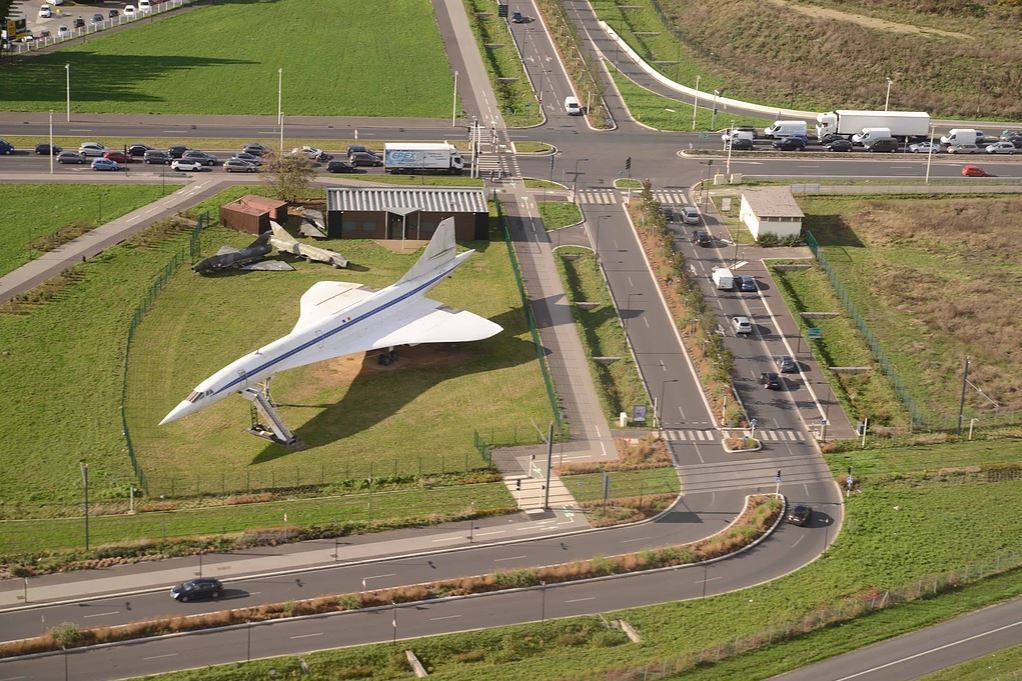 Situated near Orly Airport in Paris is F-WTSA


F-WTSA, a pre-production model, can be found at the Musée Delta near Orly Airport in Paris.

Aeroscopia in Toulouse also has two Concorde’s on display. One is F-WTSB, a production test aircraft you can go inside and check out. The other is Air France Concorde F-BVFC which is located outside. When I visited it was closed, so I am not sure if you can go on board. 
Finally, Air France Concorde F-BVFF is on display at Charles de Gaulle Airport in Paris. You can see it when entering and leaving the airport by road, up on stilts. It’s quite a striking sight!

Technik Museum Sinsheim in Germany has Air France Concorde F-BVFB on display. This museum also has a “Soviet Concorde” on display, the competing Tupolev Tu-144. The two supersonic airliners together in Sinsheim, Germany


Sinsheim is the only place in the world where both supersonic airliners are on display. You can get inside both of them as well, so it’s definitely a museum I’m looking forward to visiting.

Visit Concorde In The United States

Since the USA was Concorde’s main destination, a few aircraft were sent for display there also. Air France sent F-BVFA to the Steven F. Udvar-Hazy Center in Chantilly, Virginia outside Washington DC. They have a Space Shuttle and other great things on display too, so you should definitely go here. 
New York hosts a world record holder, British Airways Concorde G-BOAD at the Intrepid Sea, Air and Space Museum. It is there on the Hudson along with lots of other interesting exhibits. 
On the west coast, British Airways Concorde G-BOAG now resides at the Museum of Flight in Seattle. There are many aircraft on display, including Air Force One, so a visit here is definitely worth it.

Concorde fans will see that I have missed two aircraft from the list. British Airways G-BOAE is in Barbados, however the Concorde Experience in Barbados is currently closed. I have no information on when it will reopen.

The other is G-BOAB, which sits near the British Airways maintenance hangers at London Heathrow Airport. You can see it when heading to the runway sometimes, but can’t go on board for a visit.

The ones that let you sit in the seats are best, which I did in Manchester, Weybridge and Scotland. The best of the bunch is easily the “flight” at Brooklands in Weybridge. It’s fairly realistic and the seats are unbelievably comfortable!

Have you visited Concorde in a museum before? What did you think of it? If you’ve been to more than one, which one was best? Thank you for reading and if you have any comments or questions, please leave them below.

I live in the USA and have visited the Concordes in the states of Washington, Virginia and New York; all very good. I also visited the Concorde at Duxford, England and the two Concordes at Le Bourget. The Two in Paris were an especially good experience. They were parked close together, nearly nose to nose. I enter one through the rear and walked the full interior. They had all of the port seats and floor removed so you could see the interior framework, hydraulic lines, wiring etc. I exited the left door and crossed a cat-walk into the left front… Read more »

You’ve visited plenty of the Concorde aircraft around the world, which is great to see. I haven’t been to Sinsheim in Germany before, which is a place I definitely have to try to get to at some stage. Excellent that you got to sit in the cockpit in Sinsheim, which is a rare experience! Thanks for sharing that, pretty impressive!

I was fortunate to have visited Alpha Echo in Bridgetown, Barbados. The locals took a great deal of pride in the exhibit. As I write this, in 2021, the “Concorde Experience” is closed, with no word on when or whether it will open again. Pity – this was a wonderful experience!

Hopefully it will reopen once again! Fantastic you got to experience it, that’s for sure. Give it time, fingers crossed!

Good article. I’ve been to the Manchester one and there are a few others on there worth a visit too. I especially like the look of the set up at Sinsheim with the Tu-144 as well.

Same here, I really need to head over to Sinsheim – the angle of that Tu-144 is pretty strong, so I imagine it’s an interesting experience to get inside. Great to see them side by side – Concorde is far more elegant, that’s for sure!

I visited the Concordes at Le Bourget. One of them is a test airplane, which achieved some interesting records, and also has an observatory (a fancy telescope) on one side of the cabin. The presentation is beautiful and made me very unhappy that humanity could not keep this marvel going (just like Lunar landings). The entire Le Bourget museum is a full day-trip worthy for aviation enthusiasts. There is a very good shop and they also have a 747 of the first generation with parts uncovered, so you can experience everything from the luxury travel experience (the original upper level… Read more »

Sounds like I will have to go to Le Bourget to visit the Concordes there. That sounds really cool! I completely agree with you, it is a shame that such advances in technology were not kept going and developed further. What is good though is that a lot of things have flowed out of both those programmes and are used in things we see today. Great comment, thanks very much!

There is also a concorde in Barbados, near the airport in a very well built facility, and at the aeroscopia museum in Toulousse, France.

Yes, as I mentioned in the article, that one is closed. Aeroscopia is a great museum for an afternoon out – lots to see in addition to Concorde. Thanks for the comment!

lars
Reply to  The Flight Detective

Nice reading. I did see one at Heathrow terminal 2 yesterday. I suppose the purpose of this one is for letting all the travelling Englishmen take part in history and beeing proud. How long has this one been standing there ?