I had the great pleasure of flying on one of American Airlines’ A321 Transcons for my Spring Break Trip to New York! Thanks to a Black Friday offer on Expedia for $750 off a $1000 package- I booked my parents and me on this flight. I’ve always thought the plane configuration was super intriguing, with only 102 passengers and a 3 cabin set up. First Class has 10 seats in a 1-1 configuration, Business Class has 20 seats in a 2-2 configuration and the Main Cabin is split evenly with 36 seats for Main Cabin Extra and 36 Normal Main Cabin Seats in a 3-3 configuration. I love this heavy premium cabin setup, and it makes the airplane feel “Boutique”.

Okay, a not so great start to my day. The check-in for priority passengers at LAX is kind of a mess at Terminal 4 for American Airlines. And what was worse were the security lines after check-in. Not sure if this is TSA’s fault or American’s, but it was a mess and everyone was lost on what line to go to. To top it all off, the security checkpoint we were sent to was really outdated and dirty. Yikes.

Wow. I have never felt a LAX terminal so crowded. It was Saturday of my spring break, and I know a lot of other colleges shared the same spring break as me too so maybe that was why. Or maybe I’m just so accustomed to flying out on Wednesday’s.

Either way, Terminal 4 at LAX is not that nice, so my eyes lit up when I saw the new sparkly sign of the Admirals Club and Flagship Lounge. 🙂 After munching on some chicken and waffles in the lounge and totally losing track of time, I headed to the gate briskly. Boarding was delayed a tad, so I waited a bit before getting on the plane.

We boarded through the front doors, passing the 5 row cabin of the First Class. Then a galley and bathroom divided the First from Business Class. I was in 9A because window seats are my favorite! On SeatGuru I noticed it says that row 8 is missing a window, which is why I chose row 9. I very much enjoyed having 2 windows to look out of! I think row 9 is perfect, as it is away from the forward bathroom so it’s much easier to get sleep. On the way home I flew in row 7, and the bathroom light was more noticeable, especially if you are sitting in the aisle. The first thing I noticed was how big the IFE screens were! At 15.4 inches they are a really good size! Also, considering the 2-2 configuration, I was very impressed with the seat design. Everything seemed to fit into place, and the side storage was perfect to hold my water bottle and leave my phone to charge. I think it’s a great design for the amount of space. The seats are also staggered a bit, so you don’t really see the person next to you. I tested out the lie-flat and there was ample amounts of space for me, and it didn’t feel too narrow.

I love the Bose Headphones, and they were waiting at my seat when I got there (Unlike on my flight home, where they handed them out late…). They also provided extra headphones so you could continue watching after they collect the Bose headphones 30 minutes before landing.

My favorite part of the soft product was the Casper bedding. This bedding was AMAZING. The pillow was so comfortable, and the comforter was great. In my opinion, WAY better than Delta’s Westin Heavenly Bedding.

I was happy to see that I got the “old” American amenity kit. They change these darn things so often! It’s a leather “pouch” that isn’t fully sealed. I received the new kit on my flight home and the case felt cheaper and was plastic-like but it could fully close with a zipper. The only difference in terms on contents is that the old kit gives a toothbrush + toothpaste, while the new kit gives minibrushes that don’t need water! Both are pretty basic kits that give earplugs, eyemask, socks and Bigelow body lotion and lip balm. 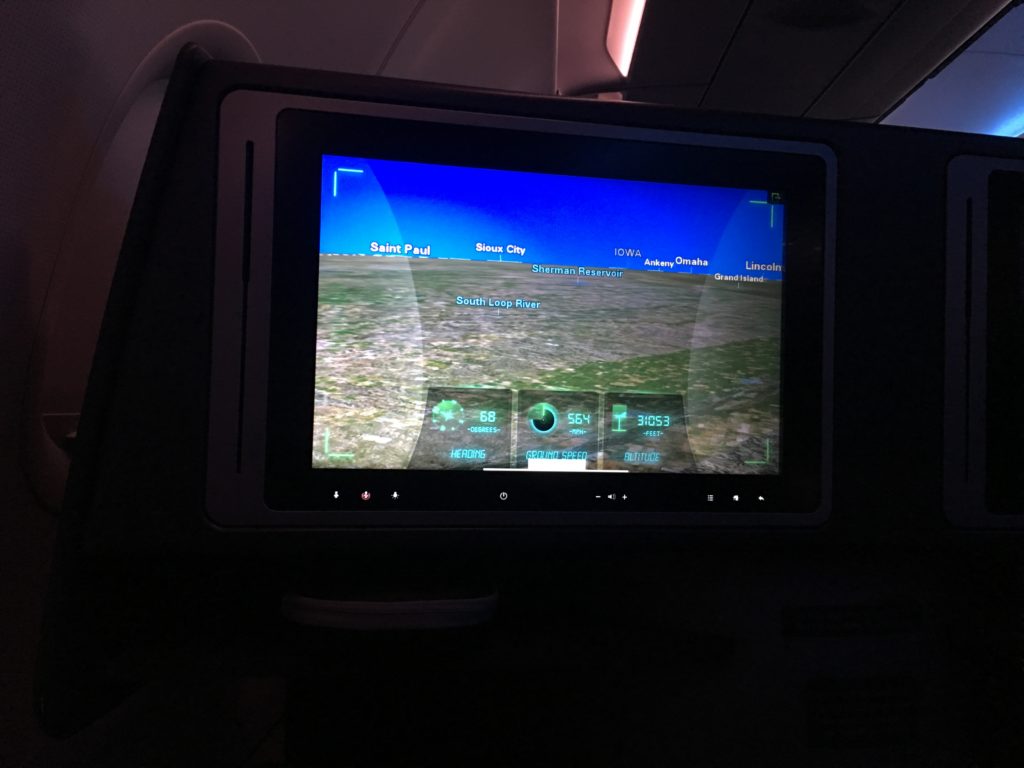 Shortly after takeoff, a drink service was given with a small biscuit. I decided to watch a movie, and Home Again turned out to be less dumb that I thought it would be. Stupid, but entertaining. 🙂 The in-flight entertainment was great, with a HUGE selection of new movies, tv shows, music. Wifi was offered on this flight at a pretty decent price at $16 for the whole flight (or $12 for an hour).

I was on a morning flight, so breakfast was served. I ordered the Strawberry Rhubarb Galette and it was nasty. Maybe I should have gotten oatmeal or the cheese omelet instead… The galette was way too sweet and the texture was soggy and not appetizing. I was happy that a chicken sausage was provided too, until I took my first bite. Super rubbery and it tasted bad. On a positive note, the fruit was good at least. Thank goodness I had a great breakfast at the Flagship Lounge or I would be more upset.

I did devour the chocolate chip cookie later in the flight, it was so yummy!

A snack basket + fruit basket was left on row 6 so I grabbed some chips and sweets throughout the flight. AREN’T YOU MISSING THE NUTS?

UGH, the Casper bedding was so comfortable that I took a 45 minute power nap. And yes, during that nap I missed the serving of the warm nuts. I remember them being AMAZING on my last American flight on the Dreamliner.

REST OF THE FLIGHT:

2 movies + meal service + a power nap takes up the 5 and a half hours. The flight went by really fast for me! Service was good overall, and I truly enjoyed my flight.

HOW WAS HOPPING OVER THE PASSENGER NEXT TO YOU?

For solo travelers, you might these seats a bit annoying that there is no direct aisle access. The B/E Diamond seats were pretty comfortable, and they are perfect for couples. My parents were just across the aisle from me and they really liked it. For me, it wasn’t too bad, but it did feel a bit awkward jumping over the guy next to me to use the bathroom (he was sleeping). But I got used to it and it was just a bit of an exercise haha. I only tripped the first time, nailed it on the way back 🙂 When the passenger in the aisle isn’t sleeping, it’s quite easy to step over them as long as their seat isn’t in the lie flat mode.

So yeah, obviously direct aisle access would be nice, but this wasn’t a huge issue for me especially for a shorter 5 hour hop.

THE VERDICT ON THE AMERICAN AIRLINES A321T BUSINESS CLASS:

Loved it. The American A321T in Business is a great way to fly from LAX-JFK. Minus the subpar food, I really enjoyed the overall experience.

Have you flown on the American Airlines A321T Business Class? What did you think of it?

Nice review. Thanks for sharing.