The Soviet built Ilyushin IL-18 is a medium to long range aircraft powered by four Ivchenko AI-20M turboprop engines. It is one of the more successful designs from behind the Iron Curtain, first flying on 4 July 1957.

Seating as many as 120 passengers, the aircraft could fly up to 6,500 kilometres, becoming the mainstay of Soviet travel for years. With production lasting through to 1985, it had remarkable longevity.

Following on from the last video on the Short Empire Flying Boat, this time we explore the Ilyushin IL-18. This video is made by Skyships Eng (who is pretty funny from time to time!) and runs for just over twenty minutes.

Everything begins with a description of the original IL-18, which was a piston engine aircraft from the late 1940s. It was cancelled and the whole thing was reborn in the mid-1950s.

From about 6:45, we hit the current IL-18 as we know it. Filming takes place on one of the aircraft in a museum and the information is interspersed with period clips. I like how the galleys and wardrobes on board are placed in line with the propellers, which was to reduce noise on board.

The cabin crew seating definitely wouldn’t pass muster today and the cockpit night illumination is pretty cool. All in all, it’s a well put together overview and I enjoyed it.

In Russia, commercial services with the Ilyushin IL-18 commenced in 1959 and ran through to 2002. Today there is just one in passenger service in the world, with North Korea’s Air Koryo. If you want to fly in that one, you could visit North Korea and do the 2020 Juche Travel Services aviation tour.

Many Eastern Bloc airlines used this aircraft, such as Hungary’s Malev, Romania’s TAROM, Poland’s LOT, East Germany’s Interflug, and Czechoslovakia’s CSA. Of course, other Communist friendly nations also operated the aircraft, such as CAAC in China and of course Air Koryo. Well over 650 were produced, making it very common in certain areas of the world.

Have you ever flown on board an Ilyushin IL-18 before and what was that like? Thank you for reading and if you have any comments or questions, please leave them below.

Featured image by Sergey Lysenko on russianplanes.net via Wikimedia Commons. 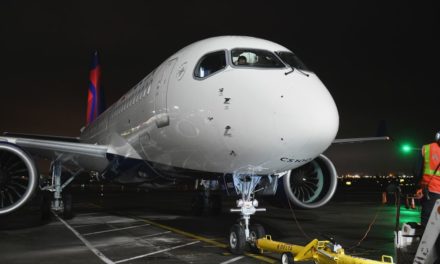 Delta start flying the Airbus A220 in passenger service I took an IL-18 from Samarkand to Moscow in 1979. It was a LONG flight with warm water as the inflight “meal”. Curtains on the windows and surly service.

Sounds like some “experience” there! I can imagine it would have been long, as the plane was quick but not as fast as a jet, of course. Great that you got to do it, surly service and all! Thanks for the comment!

Visually, this was always one of my favorite Soviet types. Never knew it was 5 abreast seating, the same as my personal fave the DC-9. Great video too! Thanks for sharing.

I agree, it’s a pretty good looking aircraft! Glad you enjoyed the video!