Does anyone remember the giant Handley Page H.P.42? The largest passenger airliner in the world in 1930 was the Handley Page H.P.42. Manufactured in Hertfordshire in England, eight of these giant biplanes were built for Imperial Airways.

Seating was provided for 18 people on long range routes, or 38 on shorter routes and inside, the interior was based on the Pullman cars of the famous Orient Express train.

Following on from the last video on the NAMC YS-11, this time we go back in time to look at the Handley Page H.P.42. Titled “Giant British Air Liner”, this little film runs just over two minutes and was made in 1930. As the narrator says, “It’s the largest passenger machine in the world”.

With a cruising speed of 105 miles per hour, which translates to 170 kilometres per hour, it was not particularly fast. I think I’ve gone faster in a car, but for the time it was acceptable enough. It certainly beat travelling by ship!

Things on the inside are quite different to what we’re used to today. The styling is very much like being inside a train carriage and the original aircraft didn’t even have seat belts, just like on trains. Lots of wood and facing seats


Those that prefer a colour picture can get a feel for the seats below. They are housed in the museum at London’s Croydon Airport, which was the original facility there before the multiple airports today. 
Plenty of room was provided inside for things like luggage, which was stored between the passenger saloons. There is even a bar provided, which you can see on the seating plans below. 
At that time, you didn’t fly very high and everything was manually controlled. This meant that air sickness was a real issue, so while fast and luxurious, it could be quite a queasy journey for passengers!

Dating from 1937, this film is called Air Outpost and shows a day in the life of the airport at Sharjah. The Handley Page H.P.42 features prominently, and there certainly isn’t very much traffic going through.

Sharjah was an overnight stop, so people stayed in a hotel at the airport and this 15 minute gem gives a real insight on how things were done back in the day. Watch out for the water cans brought in to fill up the tanks so the passengers can shower. It is well worth a look!

The Handley Page H.P.42 entered service on 11 June 1931, flying to Paris. Imperial Airways used them through to 1 September 1939, and all eight aircraft were either destroyed or scrapped by 1941.

While none of them remain to go and see, there is plenty of film available to vicariously live through those old days of flight. Flying in one would be fun, but I think I prefer the standards of safety and comfort of today compared to that of 89 years ago!

What did you think of the films? Did you even know this aircraft existed? Thank you for reading and if you have any comments or questions, please leave them below.

Featured image and black and white interior image via AOPA.
Seating plan and colour seat picture via bisonrav on FlyerTalk. 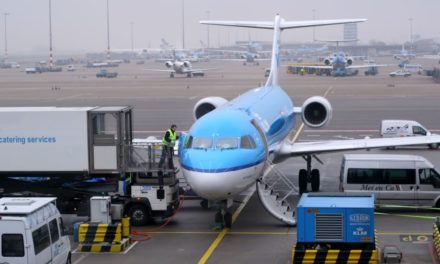 Wonderful film! I used to operate through Sharjah in the ’90s when the airline I flew for used it as a fuel stop enroute to Australia, cheaper than Bahrain!
There was still some remains of the old site .Unfortunately I never got to the Al Mahatta Sharjah Airport museum.

That’s pretty cool that you use to go through there and some of the old site was still there. Be interesting to see if anything remains today. Thanks for the comment!

Yes, that museum is on my list too…and no excuse – I live not too far away

Isn’t it just? Things are a bit different today! Thanks for the comment!