Remember the Upstairs Dining Room on the Pan Am 747? Pan American World Airways or more commonly Pan Am was the first airline to order the Boeing 747. They put the first aircraft in service in January 1970 and ushered in the age of the Jumbo Jet. What is interesting is what they did with the upper deck.

The original Boeing 747 featured a spiral staircase up to a smaller upper deck than is currently found on the aircraft. Pan Am decided to make the area the first class dining room. As per the ad, a feature is the roast beef is carved at the table. Also, you apparently need to make reservations to eat upstairs. I wonder if an extra cost was involved!

You can tell it’s the 1970s with the styling on the upper deck. The dining room also features clipper ships, which is not surprising as all Pan Am aircraft were named Clipper something. How About A Lounge In Coach?

Something else I came across while looking for pictures of the Pan Am dining room is this excellent ad showing the American Airlines Coach lounge on their 747s. 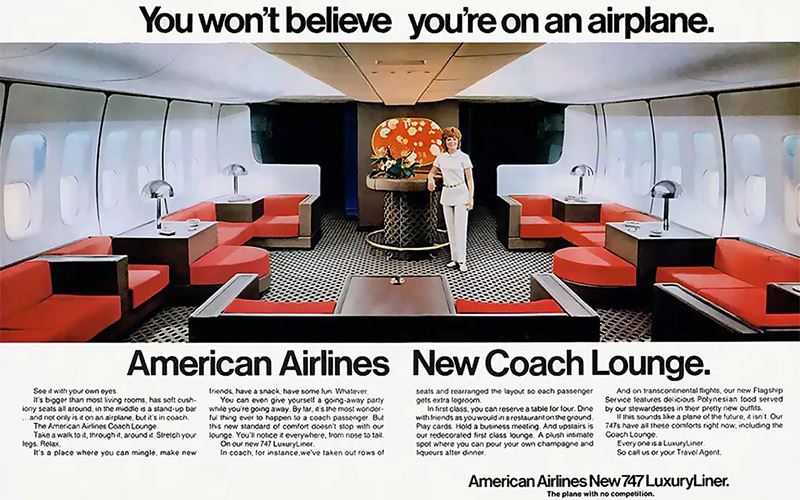 Now that is an amazing looking space at the rear of the aircraft. What is most interesting about it is how chic it looks even today – I’d be all over trying out that on board lounge!

It is a shame that high oil prices from the early 1970s meant airlines needed to add more seats and remove their lounges and dining rooms. Flying lost a little bit of its glamour when that happened.

Even so it’s fun to look back and see how things were during those few years at the beginning of the 1970s. Did you ever try the Pan Am dining room or the American Coach lounge? I’d love to hear about it. Thanks for reading and if you have any comments or questions, please leave them below.

Featured image by Mick West via Airliners.net.
Pan Am Advertisement via The Pan Am Historical Foundation.

Not only do I remember the upper deck dining room on Pan AM, I worked it regularly as the galley attendant. I started flying with Pan Am the year they initiated the dining room service in 1973. It was a fabulous company to work for and dining service was a big hit with passengers. It accommodated 14 first class passengers and it was up to the purser to invite them based on a priority list. Most people were happy to be invite upstairs to dine, and they were truly spoiled by the two crew members assigned to that cabin. I… Read more »

Hi Lucinda! That is really cool – I didn’t know dining room service only started in 1973. I figured it started in 1970 from the beginning so that is great to know. Also news to me is that you were invited to dine up there. That would have made it all that much more exclusive, so I can see why passengers would have loved it. Did you leave Pan Am or did you move on to United in 1986 with the Pacific route sale just out of curiosity? I’ve heard Pan Am were great to work for and I’ve read… Read more »

I remember the Pan Am coach lounge. I was on a flight from NYC to San Juan as a child around 1970. A couple was married in the lounge and used me as the ring bearer!

That’s pretty cool, getting married in the lounge on a flight. Great story – how random that you got to be ring bearer! Love it!

The American Airlines Couch Lounge seems sort of a cross between the Space Station Lounge in 2001 and the “Milk Bar” in Clockwork Orange.

Hahaha you’re not wrong there!! Thanks for the comment.

I remember PAN AM did one round the world trip ( married a Pan AM Purser ) One of the great old flagships and dining.

does anyone remember the Flying Pub” ? I believe that was Continental? western was the champagne airline.

Then who can forget the the “Super Carrot ? ” Braniff Airlines deep first class seats, and fantastic food out of DFW. Flew that one many times to HNL

That would have been fantastic to do one around the world trip on Pan Am! Such a really cool thing to have done.

I’ll have to have a look into the Continental and Western things. The Flying Pub rings a bell… I also heard Braniff were really good to fly on too. So many airlines that are all gone nowadays. It would be fun to see airlines trying to differentiate a bit more, but I guess there’s only so much you can do with a seat and food.