After enjoying a weekend in Chicago followed by a couple more days visiting friends in Detroit, my son and I had to head back home to California. Instead of flying out of DTW, I booked us Delta flights departing from Kalamazoo. This saved us a decent number of miles. After making the short hop from Kalamazoo to Minneapolis on a CRJ, we managed to score the very last upgrades, flying Delta 757 domestic first class for our leg back to SFO.

I’d not expected to be upgraded, in all honesty. I managed to hit Delta Platinum Medallion last year after work travel and some credit card spend. Even so, the upgrades to first have been about 50/50 this year. Traveling on an award ticket, I also knew we were the lowest fare class for our flights.

I checked the Delta app a couple times when we were hanging out in the PGA Lounge at MSP. Each time, we were dead last on the list. It took until we were at the gate for our upgrades to clear, about 10 minutes before boarding. Delta seems to either confirm a couple days ahead of time for me, or wait until the last second. It’s been either-or, almost nothing between those two extremes. 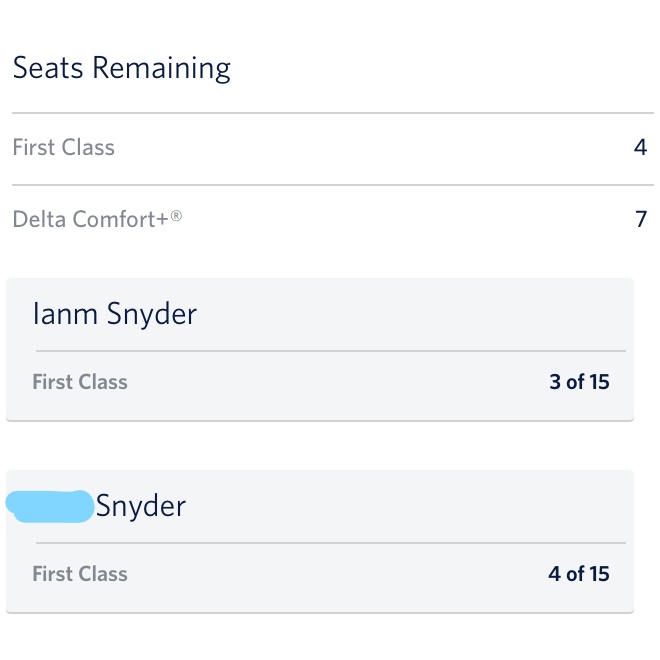 We were assigned seats 1B and 1D. This was a bit problematic. I asked my son if he would be okay not sitting next to me, and he wasn’t too keen on the idea. I mentioned this to the gate agent, and she simply said I’d have to ask other passengers to switch. Not exactly a question one wants to ask other first class passengers.

However, by the time we got down the jet-way and on board, he’d changed his mind. We were in the same row, and he could see me just fine. It was all good. Row 1 meant flying the bulkhead seats. The flight attendants served pre-departure beverages. I asked what the options were, used to a tray of orange juice and water. But no. She listed off everything cheerfully and as fast as could be. Well, then. A Prosecco would do just fine. A tiny bottle of water is also provided at each seat. The guy next to me realized that my son and I were traveling together and offered to switch aisle seats. It was very gracious of him. I’d already decided that I really didn’t want to bother anyone in the premium cabin about switching.

Delta 757 domestic first class offers a seat that is 21 inches wide with a pitch of ~36 inches. This is 4 inches wider and about 5 more inches of legroom than economy. At each seat was a pillow and blanket for the approximately 3 hour 45 minute flight. We’d be arriving pretty late into SFO. The seats are nicely padded and comfortable. The in-flight entertainment screen is mounted to the wall at the bulkhead, which is honestly nicer than when it is contained in an armrest, in my opinion. There are power outlets between the seats, one for each passenger. With how ubiquitous devices are, seat power is a much. I almost panicked just last week when I boarded an Alaska flight and didn’t see any power outlets. It was going to be a long five hour flight, as my laptop would have quickly died (but I found the outlet). Such first world problems. Each seat also has a USB outlet as well, plus the standard headphone jack. You really can’t ask for better for a flight of this length. Comfy seat, free dinner, and no extra people next to you. Flying up front is the best way to end a fun trip! My only comment on the bulkhead seats is that they probably have the least legroom of any of the Delta 757 domestic first class seats. Typically, bulkhead seats are what you want when flying economy, but they may not necessarily be the best when you’re flying up front. I also didn’t like the fact that things weren’t “open” in front of me. I’d much prefer to be a couple rows back. But hey, we didn’t get to choose.

This was the second time I’d ever flown through Minneapolis-Saint Paul airport. As a major Delta hub, the view of the aircraft around were what you’d expect. It was late in the evening, and the shadows were getting long. I’d hoped for a nice view of the city, but there wasn’t much to look at on ascent. Then it quickly got both hazy and dark and I shut the window shade. The flight attendant took meal orders back to front, which meant we were last. I’m not sure what the other option was, but by the time she got to us, our only choice was the stuffed chicken breast. This was served with a Caesar salad on the side, plus a personal cup of ice cream. The food was decent. It’s hard to complain over a free dinner. The chicken was a bit tough and overcooked, but everything hit the spot. We hadn’t eaten much in the PGA lounge, as you get a pretty minimal food credit.

The first class flight attendants were polite, attentive, and friendly. They kept us satisfied with drinks, and offered a snack service midway through the flight as well.

We both watched a movie on the IFE to pass the time. Seat-back entertainment is one of the standard features that I am glad Delta is committed to keeping. I didn’t check WiFi prices, as work wasn’t on my mind at all that day. Generally, I’ve found Delta WiFi speed to be adequate enough for email, blogging, and other basic functions.

We touched down at SFO at 9:43 and pulled up to the gate ahead of schedule. This is the heart of why I prefer to fly Delta over United. After so many delayed trips and missed connections, it was nice to leave SFO and get to our hotel and to bed at a decent hour. We’d finish the drive home in the morning.

This was my first time flying Delta 757 domestic first class. It was actually my first time flying first class on a 757, period. The standard recliner seats aren’t much different than what you’d find on one of their 737s, there are just a couple more rows of them. It’s a fine product, and one that I’ll happily take as an upgrade whenever I manage to clear. Goodbye, Chase Sapphire Reserve. It Was a Fun Ride.