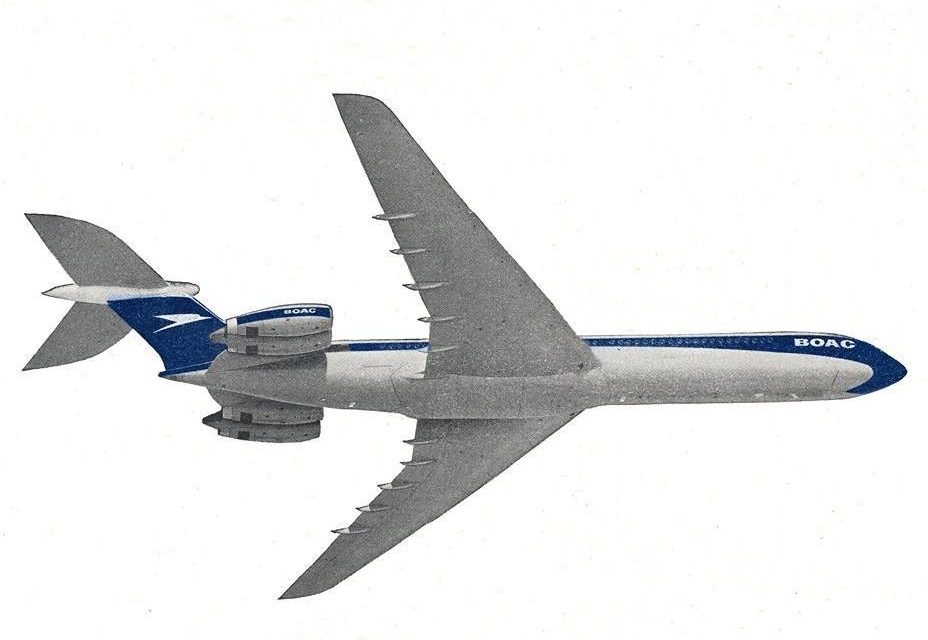 The advertising department at BOAC went to town selling the airlines Vickers VC10 and Super VC10 during the 1960s. Marketing students learn to find a products unique selling point or USP and this aircraft certainly fits the definition.

BOAC were the main operator of the aircraft, which happens to be one of my favourites. The print ads are a fascinating look at how air travel was marketed during the era of the jet set. You’ll be able to read most of the text too, if you’re using a laptop rather than a phone.

BOAC Takes Good Care Of You

This is one of the main slogans used by BOAC during this era, so it comes up on quite a lot of the advertisements. You can see it in the advert below. Much is made of the features of the VC10, especially how the engines are behind you which means it has a quiet cabin. You will see this theme quite a bit in these ads. I like how the above refers to two new stars in the sky. It is hard to imagine any aircraft advertised in such a way in today’s aviation industry.

How About Some Sex?

Sex sells and this has been the case for quite a long time. Using a line like, “There’s always time for a new experience” coupled with a seductive pose from a model is sure to grab people’s attention. I love how it then goes on to say, “the unbelievable comfort of the world’s most exciting jet”. It’s a pretty bold statement to make, but one I agree with of course! Keeping with the sex sells theme, there’s also this. An entire piece about their fantastic new Economy Class seat. Naturally it’s for every body a pun which gives them an excuse to have a seductive lady in a bikini. Note how the man appears to be checking her out. Welcome to the 1960s! Finally there is Marlene Dietrich showing off her legs. Included in the ad is a reference to “leggy movie stars” in among the announcement the VC10 will be coming to LA.

Much is made of the fact the engines are in the rear and the aircraft is quiet inside. From the outside it is another story, but that is not mentioned in the ads of course! Cabin crew report that sitting down the back in between the four Rolls-Royce Conway engines at take off was anything but quiet. You wouldn’t guess from these though. Next is an advertisement from Australia for flights to Fiji. During that time, multi stop flights were quite normal so Fiji would have been one of the stops on the way to the United States. Another quiet one and this would have looked superb on a billboard I expect. Knowing how loud the VC10 is from the outside, the words make me smile.

What strikes me is how distinctive the tail of the aircraft is. Some refer to it as a whale tail and I guess it does look a little bit like one.

It is interesting to note the next ad about the BOAC cabin service. A Chief Steward runs the show from the service, assisted by a First and Second Steward, along with three stewardesses. I wonder which sex was dominant here? One thing I really like about this era is the advertising copy. It is so different from now to the point that often we have none with our ads any longer. To dream that you are floating high on a cotton wool cloud to North America indeed! Now, who literally puts a picture of a seat and only the seat as a feature in an ad? After reading all of these, I’d really like to try out the seat myself. From the claims, we should be going back and making them again and using them today!

A Quintet of Tails

As the most distinctive feature of the aircraft, the tail appeared in a lot of the BOAC advertising. Here are five more selections dominated by the T-Tail. Making a claim that something is a great step backwards in aviation is certainly very daring. Potential for it to be misinterpreted is quite high but it does work when you read the copy. Fifteen different types of aircraft by twenty different airlines? I would like to see that list and also to see if any airlines tried to claim their aircraft was the best! Pretty cool, right? It is very different to today when most airlines operate the same equipment. Nearly at the end now so stay with me!

These two have the same picture but there has been an edit made. The original livery changed not too long after service introduction so the second advertisement has it amended. Can you spot the difference? Correct, the cheat line at the cockpit is different. BOAC amended the livery to the classic and very beautiful one used through the late 1960s and early 1970s.

While these don’t feature the aircraft quite as often as the previous ones, they are worth checking out. It is a shame a couple of them are too low resolution to read the text. Triumphantly swift is no random claim either. The Super VC10 still holds the subsonic record for fastest flight across the Atlantic, which is some feat.

BOAC advertising from the era of the jet setters is pretty amazing. I love how they have really put a lot of focus on the VC10 aircraft itself. Passengers apparently loved the aircraft, actively choosing it over competing airliners such as the Boeing 747.

What do you think of these ads? Should airlines today focus more on their aircraft like BOAC? Thank you for reading and please leave any comments or questions below.

Intriguing plane. I wonder why passengers preferred it to the 747.

Perhaps it was quieter, perhaps it was due to all the advertising and perhaps because it was unique and British. Apparently people continued to actively choose it which is why it was kept on some prestige routes longer than they originally planned.

It was also fast. A VC10 still holds the record for the fastest scheduled crossing of the Atlantic by a subsonic airliner.

Yes, that it does – now I wish I had been on that flight! Thanks for the comment!