Developed by Avro to a Trans-Canada Airlines specification, it never went into production. This was due to an unfortunate series of choices by the Canadian Government. Canada lost what could have been a commanding position in the commercial aviation industry as a result.

Following on from last weeks video about the Boeing 307 Stratoliner, this week we head up to Canada for a look at the Avro C102 Jetliner. Running for just over 15 minutes, it is a fascinating glimpse into the story of this aircraft.

Both the main designer and chief test pilot – Jim Floyd and Don Rogers respectively – are interviewed about the C102. Their memories are very good, with many interesting details on how things came about and how it was to fly.

There are some fun anecdotes about the first arrival into New York, which shows people’s unfamiliarity with jets at the time. A CBS radio reporter also lists some of the records the Avro C102 broke in the United States in 1951.

Due to the cold war, production at Avro was ordered to focus on a military aircraft instead. Cancellation occurred in December 1951, and the almost completed second prototype was broken up.

How About One More?

This second video runs for around eleven minutes and again designer Jim Floyd gives an overview of what happened. Start it at 2 minutes 45 seconds as the introduction is unnecessary. What I particularly like are the many shots of the aircraft, both in colour and black and white.

The world’s first jet airmail was carried on board the Avro C102 Jetliner, flying from Toronto to New York in 58 minutes. This was half the previous record time.

It is sad to think about all that effort wasted on such a technologically advanced aircraft. The sole C102 was eventually donated to the National Research council. They had no room for it, kept just the cockpit and broke up the rest of the aircraft. You can see this today in the Canada Air and Space Museum in Ottawa.

Lots of pictures can be found here at the Avro Museum web site, which are worth a look. What do you think about what happened to the Avro C102 Jetliner? Thank you for reading and if you have any comments or questions, please leave them below. Which 8 airlines have operated jets since the 1950s? 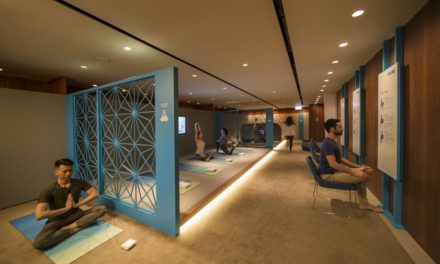 A new trend in airline lounges: Yoga, Stretching and Wellbeing

Remember? This aircraft is like having a dead older sibling to me. You have only touched on a tiny portion of the injustices done to this aircraft. Trans Canada was instrumental in killing it. They decided they wanted the range to be destination, alternate plus an hour and 45 minutes instead of the standard 45 minutes that all aircraft are designed for. It had all of its testing done and was ready to fly. De Havilland had not finished testing but found out. So they took their aircraft out to the runway, took off, as soon as the wheels left… Read more »

Yes, you are correct, there is a lot more to the story than I was able to pop down in a couple of hundred words. It’s really such a sad story of what could have been, with huge implications for the Canadian aircraft industry, such as it was. The only thing I think you may have wrong is the de Havilland Comet first flight – you are correct, in that it did do practice runs as you described. There were press there and they were doing that. However, the press were then sent home, as they expected that was it… Read more »

It is incorrect to say the C102 was the second passenger jet aircraft to fly in the world. In fact it was the THIRD passenger jet to fly. Preceding both the Comet and C102 was the jet powered version of the British Avro Tudor. The C102 design in fact was based on the jet Tudor. From the Jet Tudor Avro developed the ASHTON of which a number of examples were built. The Ashton was almost identical in size and appearance to the C102

Well, the Avro Tudor was not purpose built as a jet aircraft. You are correct in stating it did have jets as a test for one airframe and that it evolved into the Avro Ashton, which was also experimental. I was unaware of both of these things, so thank you for pointing that out!

It is a shame that they didn’t produce the aircraft, as it was groundbreaking for the time. I agree, it would be awesome to have a museum like that. Can’t see it happening though – us fans will just have to travel from museum to museum to get our fix. Thanks for the comment!

I vaguely recall reading somewhere that TWA/Howard Hughes was seriously interested in ordering the plane. I can’t remember exactly why it wasn’t ordered but I think it had something to do with financing on the TWA end and some vague political intrigue regarding the “Buy American!” mentality of the time.

From looking around, it seems TWA/Howard Hughes wanted it, but the Canadian Government wouldn’t let Avro produce it. It’s a real shame all that effort was wasted!

That clears that up. So I’ll claim sort of a win on my sometimes sketchy memory!

The Canadian aviation industry has always suffered due to inconsistency in government policy. The similar story of the stillborn Avro Arrow interceptor comes to mind. The problem hasn’t been government involvement or governmental neglect. Instead, the problem has been wild swings in policy from election to election, with some governments offering supports or making pledges, followed by subsequent governments reneging on those pledges. Both aircraft, along with airlines like Canadian Pacific, have failed because there business cases have been based on unfulfilled promises.

Yes, I’d say all of that would be fodder for a number of books really. It is interesting to see how different things are in other countries when it comes to politics. To an extent, the UK industry suffered in a similar manner with some of the aviation projects there. Thanks for the comment!