For just US$261.30 I was able to fly American Airlines 737 First Class from Washington DC to Miami on a dinner flight back in 2012. This was a mileage run, and immediately after this were two transcontinental services back to back. You can read all about the experience here.

After spending some time in the Admirals Club, I proceeded down to the gate. Boarding was already underway, and I queued up inside the aerobridge until it moved enough for me to get on.

As I’d missed the start of boarding, all of First Class was seated apart from me, so I stowed my cabin bag and sat down. I knew I was last as every other seat was taken. I had a great view of Virgin America next to me We were offered water before takeoff

The American Airlines eagle on a bulkhead near me


There were a lot of announcements during boarding about it being a full flight and to stow carry on bags overhead and smaller bags under the seats in front. At the end, all of the bags fit on board, despite the crew asking people to come forward to have their bag checked if they couldn’t find space.

Of course, once everyone was seated, we pushed back, and the safety demonstration came on video over the modern flip down screens. If you squint, you can see it!


Once we were in the air, the guy next to me went to the toilet (a Latino businessman who had said hello when I first boarded), so I was able to take a couple of pictures without looking too geeky. Between the seats, there is a nifty extra drinks holder in addition to the one in the armrests. In the stowed position Open and ready to use 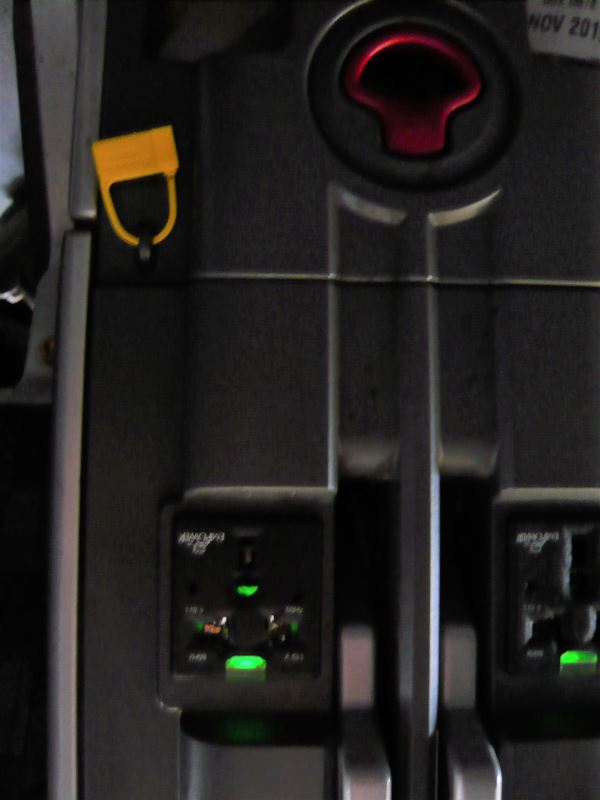 And, by stretching, I could take a picture of the laptop charging socket between the seats The drink trays in the arm rests look like this


We had hot towels given out (mine was lukewarm and filled with water which was unusual), and then the service started. American Airlines gives out warm nuts with the drinks, and it’s so nice to have them in a little bowl and warm rather than in a dinky bag and cold. A beaker of white wine


After getting the wine, I promptly gave it back as I didn’t want it and had a Coke instead. Too much drinking on my holiday meant I wasn’t in the mood (and it didn’t taste particularly nice, though that was probably just me!)

Dinner High Above The Clouds

Being an evening flight, the view outside was constantly changing. 
Dinner was served. I chose the Salmon. Before it was served, the dressing was ladled onto the salad from the trolley. I was then offered white bread or wheat bread. The meal also had cheesecake for dessert.

I had to send back my first set of cutlery as they had food remnants on them from a previous flight. Once I’d eaten the very sticky (and delicious!) cheesecake, I understood what I had seen on the previous set. It would be quite hard to get off. 
Anyway, the meal was very good indeed, and I devoured the whole thing. The cabin crew continually came by offering top ups of drinks, extra bread and so on. They were very attentive – once people had finished, trays were taken very promptly. The service was outstanding!

The aircraft was also fitted with WiFi, as evident by the card in the seat pocket as well as all the “WiFi” logos up around the seat numbers on the overhead compartments. I decided to give it a try on my phone, but I couldn’t even get to the screen where it asks you to pay. The flight was fairly turbulent, so perhaps that was why – I didn’t try for very long. Once it didn’t seem to work, I just put it out of my mind. I didn’t pay any attention to the inflight entertainment at all. We were given in ear headsets in little bags that were left on the seats when we boarded – which are free in First and $2 in Economy. In the window behind me, I could catch the wing and engine


The new style seats have all the mod cons – laptop charging, ample drink space, and look great. However, I found them to be quite uncomfortable from about the second hour onwards. The seat was quite firm and I really noticed it and began to wish for the flight to end. Luckily, it was soon time to land in Miami at dusk. More views of the coast This must be the Everglades


We arrived on stand and disembarked into a very busy Miami terminal.

American Airlines 737 first class is very good. The leftover marks on the cutlery (not to mention the small bits of hard to remove food) looked fairly shabby, as I’ve never seen anything but sparking cutlery on other airlines. The dinner service was adequate, but less than I would have expected on a dinner flight, really.

And that is how I reported on things at the time. I went on to fly Los Angeles to Miami on the Boeing 757, then I spent four hours at LAX before flying back to Miami again! Things we do for elite status.

What do you think of the American Airlines 737 first class experience from 2012? Is it as you remember? Perhaps it’s better today or maybe a bit worse? Thank you for reading and if you have any comments or questions, please leave them below. Why can’t you select seats on Amtrak trains in the USA?

airBaltic commence Dublin to Riga with the Airbus A220

Those ‘old’ interiors were so comfortable. Spend hours in them and loved it. Those little touches like the AA logo on the pop down drink tray (on the seat in front of you), the drink holders which formed wings when both were open. And just the overall “niceness” of it. Their leg room was top notch and the seats were very comfy. Their new interiors are such a downgrade compared to these older ones.

I hear you on that, the new interiors are a less special, as they seem more generic, with less attention to the details. Glad to hear you liked them and there are some of them still flying around, so I guess you could get lucky from time to time. Thanks for the comment!